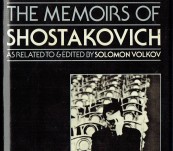 A first UK edition of the memoirs … as related to and edited by Solomon Volkov.

Much controversy surrounds this book perhaps because of its fairly frank position of the great man’s views on … other composers, Stalin, the system etc. However, Solomon Volkov was very close to Shostakovich in his final years … and unsurprisingly Shostakovich instructed for it not be published until after his death and Volkov, who presumably had the control, never published the book in Russia.

Dmitri Shostakovich (1906-1975) was nine before being taught the piano by his mother … his natural talent was immediately identified … he could repeat the pieces the next day without reference to the music score. His first symphony at 19 was success. Not all of his efforts were successful afterwards … his music too experimental at times for the Communist rule … particularly Stalin … who later had a habit of disposing of his friends and relatives. Later his music softened and he was gradually brought into the embrace of the hierarchy.

The photographic images are special … with Prokofiev and Khachaturian … imagine the conversations.