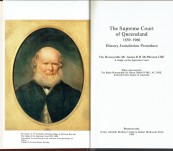 A first edition of the book on the Queensland Supreme Court up to 1960. Published by Butterworths, Sydney in 1989.

With colour portraits and black and white text illustrations. A very good copy.

The author, Bruce Harvey McPherson (1936-2013) was South African born who graduated from Trinity Hall Cambridge in 1959. Shortly after he moved to Brisbane. He was admitted to the Queensland Bar on 1965 and made QC in 1975. He was appointed to the Supreme Court in 1982 and then the Court of Appeal in 1991 continuing in that role until his retirement in 2006.