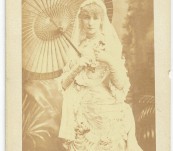 She addresses “Mon Cher Paul” mentions her pretty niece and trying to arrange a suitable time to catch up.

The letter is accompanied by a photographic portrait of Bernhardt, a cabinet card depicting the legend in Camille by Dumas which she performed in 1882. 16cm by 11cm mounted on original card minor edge chips, plain back.

Also relating to her tour of America (see below) two “Between the Acts & Bravo” cigarette cards, also from the 1880’s, issued by Thomas Hall, New York. 7.5cm by 4cm each, very good condition.

1887 was an interesting time for the “Divine Sarah”. She was well established by this time but had

developed an extremely lavish lifestyle and had a gambler for a son that she supported financially. Already accustomed to touring a mammoth tour of South and North America was organised by her manager Edouard Jarett. It was hugely successful an she returned to Paris the year of this letter with a million francs. Unfortunately, her manager died of a heart attack on the tour … it didn’t stop Sarah indulging in some of her favourite pastimes … such as collecting exotic animals. She brought back an alligator that seemingly was partial to champagne. Among her other strange activities was sleeping in a coffin when trying to get into character for rather dowdy parts.