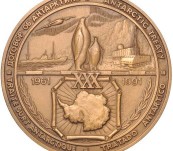 A scarce Antarctic medal celebrating the thirty year anniversary of the signing of the Antarctic Treaty.

The Antarctic Treaty regulates international relations regarding Antarctica. It was signed by 54 parties and came into effect in 1961. The treaty established Antarctica as a scientific preserve with freedom of scientific investigation, banning military interest. The Secretariat is based in Buenos Aires. The Soviet Union being one of twelve countries at the time that had activities on the continent.

The face of the medal has a penguin and young one over a high relief map of Antarctica. Images of a ship, aeroplane and snowmobile representing investigation by sea, air and land. Around the outside “Antarctic Treaty” in the four official languages English, French, Russian and Spanish.

On the reverse a compass sign over another smaller continental image and a dominant Dove of Peace, with appropriate sentiments in Cyrillic.