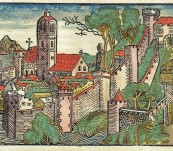 The Nuremberg Chronicle published in 1493 was written and compiled by Hartmann Schedel (1440-1514) a physician from the German city of Nuremberg. The text was published in Latin and German … this version being in Latin and, is also known as the Liber Chronicarum (Book of Chronicles). Given that moveable type had only been invented some forty years earlier the “Chronicles” were published at the height of early printing activity and, at the time, represented the most heavily illustrated work yet published. In 1497 Schedel again published the work printed by Johann Schonsperger in Augsburg. This example is likely from that edition which turns out to be harder to find than the 1493 edition.

Page size 28cm by 20cm on thick sturdy paper, strong impression with very black ink. The foxing spots are obvious but exaggerated on the scan … a very good example.

The engraving is of the city of Nineveh in modern day Iraq. It is a woodcut and was set into the type block before printing. The rather bold colouring is typical when coloured and contemporary. The illustrators employed were Michael Wohlgemut (1434-1519), Wilhelm Plydenwurff (1460-1494) and likely, the to become great, Albert Durer (1471-1528) who was apprenticed to Wohlgemut. The image itself is a fantasy and the Nuremberg Chronicles include many views that are used for multiple location … for example this image is also used for Alexandria, and regardless of that, careful study will confirm a more European style of architecture … more like Nuremberg really. Wilson’s book “The Making of the Nuremberg Chronicle” is a super reference on this mysterious element.