One Ceremony One Song. An Economy of Religious Knowledge Among Yolnu of North-East Arnhem Land. A PhD Thesis – Australia National University – 1978 – Ian Keen 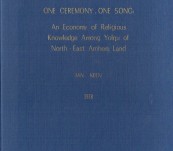 An original copy of the monumental Thesis written by Ian Keen to obtain his PhD from ANU in 1978. Keen to go on to be a respected anthropologist holding positions at Queensland University and ANU and spending time at Oxford, visiting Professor at Osaka etc.

Perfect bound in blue cloth covered boards, gilt titles to front and spine. Typed on one side 412 pages with 19 pages of plates from the authors photographs; 72 Figures in text; 45 tables of information and 4 maps. This copy gifted to "Jimmy" clearly an associated academic with a few marginal notes etc. Over 3 kgs in weight so if Overseas a postage supplement will be necessary.

The English born author was late to the academic world having first worked as an art restorer before doing an undergraduate degree at the University of London under Mary Douglas in his mid thirties. He did well and soon won a scholarship to work on Aboriginal religion through song symbolism in Arnhem Land, Northern Australia. This thesis demonstrates the depth of his research and provides a meticulous record of his findings.

He commenced his work on the island of Milingimbi in 1974 and worked there for fourteen months before completing a further 10 months on the mainland at Nanggalala. Its is not surprising that “’writing up” took him some time.

His “Abstract” explains his examination of the relationship between the organisation, ownership and content of religious practice and knowledge, marriage and power relations in Yolnu society. He argues that older men require the authority gained through their control of secret ceremonies and religious knowledge, in order to sustain a polygamous regime. Making possible a system of marriage through which some men gain many wives. Keen’s description of the various ceremonies is highly detailed … we doubt if any broadly published material covers such content with similar vigour.

A special reference relating to the Yolnu of Northern Australia.