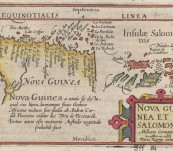 One of the earliest maps of New Guinea and the Solomon Islands. First published in 1598 by Cornelis Claesz in the Langes … Caert-Thresoor and is then issued in the Bertius Tabularum Geographicarum around 1600. This example, with the latinised name of the engraver as Petrus Kaeris clearly seen in the decorative cartouche, published in “Petri Bertii geographischer eyn oder zusammengeezonger tabeln” by Henry Laurentz in Frankfurt in 1612. Refer expert Geoffrey King page 82.

Finely engraved, very good condition, measuring 13cm by 9 cm. Only the northern coastline of New Guinea is shown, but in some detail … the south waiting nearly a further three centuries to be properly charted. Interesting to compare the Solomon Islands with that depicted by Mallet some seventy years later.

The Latin text in the body of the map is of interest. New Guinea being the “sailors” name for the land … also know as the Land of the Bird-of Paradise (“Terra de Piccinacoli”). Similarities with Africa and a land likely of continental proportions. Interestingly, a further development and re-engraving of this map in 1616 included a hint of Australia in the southern regions.

A key maps for New Guinea and Solomon Islands collectors.