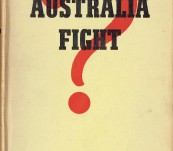 A very good copy of a scarce Ion Idriess book. Published by Angus and Robertson, Sydney in 1939. Signed boldly by Idriess on the Title Page … “To Mrs Van Cleef with cheery memories from Australia – Ion L Idriess Sydney 1939”. Van Cleef was the wife of a wealthy Chicago industrialist that had connections with Idriess.

Octavo, 223 pages, complete dust jacket albeit a bit browned at spine and around edges otherwise clean. Very clean internally bar a mark bottom inside title. Endpaper maps – “Australia in the Pacific” to front and strange one at rear “An Arresting Comparison: Australia and the European Countries Drawn to Scale”.

In some ways a prophetic book. The Authors Note starts … “This book is written simply because our country may be in danger …”. WWI veteran Idriess saw danger in the Pacific. Chapter headings help understand the flow of the book … a selection… How will the Enemy Come?; Action in Defence; Defending our Cities; Dodging Bomb and Shell Fire; Fighting at Darwin or New Zealand; Should the Dutch east Indies Fall; Protecting the Isolated States; Fighting from Cover; Trained Man versus Untrained; Deadly Shooting; The Sniper; Australia Needs Submarines; Australia’s Land Bridget to Asia; Defence Could Develop New Industries etc.

We wonder how this book was received at the time … maybe the fact that Idriess was called to produce succinct accounts about fighting techniques after war broke out, tells us that top brass thought highly of this work.