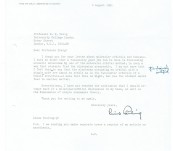 One of the top 100 scientists that have ever lived. Along with Marie Currie he received the Nobel Prize twice in different fields, Chemistry and Peace the only person to have received two alone in their own right.

Valence theory and the application of quantum mechanics to molecular theory was his forte. Here we have him corresponding with Australian Professor David Craig at University College, London. Craig spent much time there and then later at the Research School of Chemistry, ANU, Canberra.

“I thank you for your letter about molecular orbitals and benzene. I have no doubt that a reasonably good job can be done in discussing aromatic molecules by use of the molecular orbital method, in such a way that students find the discussion acceptable. I am not sure that I feel that it is obviously justified to say that the electrons occupying an orbital with a single node are about as stable as in the two-center orbitals of a Kekule structure – I know that this is right, but how the student would feel is another matter.

Nevertheless, I have not reached the conclusion that I should attempt much of a molecular-orbital discussion in my book, as well as the discussion of simple resonance theory.”

An enlightening view … Kekule having established his principles in the mid-19thC. It was not until molecular orbital theory that the properties of aromatic molecules could be more readily understood. Pauling used X-ray technology to support his findings. In a number of areas, he was “in competition” with Australian born Sir Lawrence Bragg, who was running the Cavendish Laboratory, Cambridge. Pauling discovered the protein alpha helix after many years of painstaking work … without this the work on DNA would have come much later. Having won the Nobel Prize in Chemistry for his pioneering work he became a strong anti-bomb supporter and through his efforts to suppress cold war activity was awarded the Nobel Peace Prize. Later he became a champion for the use of vitamin C as a near cure all.