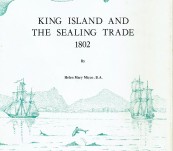 An important work regrading Tasmania’s King Island and the sealing trade at the very beginning of the 19th century.

Put together by Helen Micco and published by Roebuck as part of their historical series. A first printing of 1971. Small quarto, 51 pages after preliminaries, 7 full page plates not included in the pagination. A particularly good copy. Carries the nicely style bookplate ex libris Gisborne Park, carefully affixed only at the top so as not to actually intrude on the endpaper map.

Based around extracts from Francois Peron’s account of the Baudin voyage in Le Geographe and Le Naturaliste from 1800-1804 during which they visited King Island.

After a description of the original documentation an outline of the voyage we have a translation of Peron’s work … “King Island: The Hunter Islands: The northwest part of Van Diemen’s Land. From 18th November to 27th December” 1802. And .. “History of the Sea Elephant or Trunked Seal: English fisheries in Southern Lands ... the advantages that the English derive from the Seals of the Southern Lands.

There follows a tribute to Peron and a series of Appendices including to and from Baudin and Governor King. Finishing with a useful note by Isobel Bennett of the Department of Zoology, Sydney University regarding the Australian wildlife mention in the voyage with reference to the illustration by Lesueur of which Voyager often has examples.

King Island a magnificent place and an important part of its history.