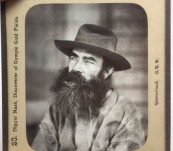 Original 3.5 inch square, standard size, lantern slide. Original label from G.W.W.. Fine quality image – no damage or mould. We are sorry that if you look closely you will see my iphone reflected in the image ...

G.W.W. sent their top photographer, Fred Hardie, to Australia in the 1890’s to take images for their business in “Travelogue” lantern slide. He travelled from South Australia to Cairns, Queensland mainly by train but occasionally by horse and trap. Very active at the time G.W.W. went out of business just before WWI, through competition and a waning in interest in the product.

The slides produced are quite scarce, some more so such as this one. The bulk of the G.W.W. catalogue eventually ended up at Aberdeen University. Expert in the field, Mark Butterworth, tells us that the original plate for Digger Nash is missing from that archive. He regarded this as probably the finest photograph of Digger Nash known to exist. He donated a copy to the Gympie Gold Mining Museum.

James Nash (1834-1913) discovered gold at Gympie in 1867. Born in England, he migrated to Sydney at the age of 23. In 1863 he moved to Queensland, to calliope and Nanago. On an extended prospecting tour in 1867 he found rich deposits near the Mary River. His report of the find on 16th October of that year started on of the wildest gold rushes in history.