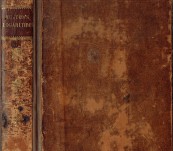 Longer title … Mathematical Tables; containing the Common, Hyperbolic, and Logistic Logarithms. Also, Sines, Tangents, Scants, & Versed Sines both Natural and Logarithmic. Together with Several Other Tables useful in Mathematical Calculations. To which is Prefixed, A Large and Original History of the Discoveries and Writings relating to those Subjects …

There is much debate about who really set down the first logarithmic tables, but it was certainly Scotsman Napier (his “bones” were used by Captain Cook et all). Napier’s work was taken up by Briggs and then on to Hutton.

To have a book of tables may seen rather dull (we like them) but it is the 179 pages before the tables that make this book especially interesting to those with a penchant for the history of Science. The first 17 pages is just that a history of the development of “higher level” mathematics. Then the invention of logarithms and their construction … Napier, Kepler, Briggs, Mercator … and Newton and Halley’s methods.

Interesting gift annotation … given to David Wilkie Student in the Junior Mathematical Class as the Highest Prize … for Patrons of the University – William Wallace – Professor of Mathematics April 19th, 1832.

William Wallace (1768-1843), astronomer and mathematician was Professor at Edinburgh University. He started adult life as a bookbinder! Inventor of the eidograph for scaling drawings. An expert in geometry. At the time this book was published he was a Master of Mathematics at the Royal Military College so would have known Hutton. It seems likely that this later prize (1832) was of Wallace’s personal copy of the book.

Hard to find mathematics – essential for when the internet gets full.