Himalayan Journals; or, Notes of a Naturalist in Bengal, the Sikkim and Nepal Himalayas, the Khasia Mountains – Sir Joseph Dalton Hooker. – First of Type 1891 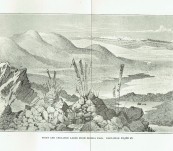 First edition in this form published by Ward, Lock etc London in 1891. Previously published by the Calcutta Trigonometrical Survey Office and Murray.

The two folding maps are rather special. First, the Map of Sikkim and Eastern Nepal by Hooker himself, showing his routes, is in terrific topographical detail [Hooker was known for fine detailed work] and substantial narrative remarks are added. The second Map of Bengal, The Himalaya and Tibet was drawn up by the distinguished cartographer Augustus Petermann, who did so many great maps of the interior of Australia, is drawn in a similar detailed topographical style with pictorial additions. The maps carry a library stamp although the books are not ex lib .. when first bought by Voyager the book came without maps and the vendor kindly sent these to make it up ... they are the correct maps for the edition ...it's a long story.

Joseph Hooker (1817-1911) was the first traveller to make a near complete circuit of Kangchenjunga, as part of his numerous expeditions in the region between 1847 and 1850. So unsurprisingly this represents a classic in early Himalayan travel and exploration. A fair amount of adventure amongst the botany, views, people etc Hooker was imprisoned for several weeks by the Rajah, and later imprisoned again.

The diaries were written as he went ... not on return … we like that.

Hooker was one of the most distinguished scientific explorers of the 19th century. He had already been to the Antarctic with James Clark Ross on the Erebus. He also spent time in Africa and later gathered samples of flora from the North Western parts of America. The extent of his original work on flora we doubt has ever been surpassed … virtually all of the grand homes in Britain owe their rhododendrons from seeds brought back from the Himalaya by Hooker … if you are ever in Northumberland go to “Cragside”. He was probably Charles Darwin’s best mate but unfortunately fell out with Richard Owen about the independence of Kew and it all got quite nasty. We are on Hooker’s side.

Joseph Hooker in and around the Himalaya before the others and ... not just about flowers.