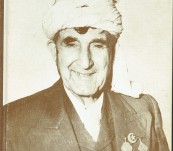 A scarce book published by Investigator Press of Leabrook in 1972; effectively self published. Octavo, 80 pages, illustrated throughout.

Mahomet Allum was born in Kandahar, Afghanistan about 1857. He came to Australia in the 1880’s as a camel driver, working in Western Australia mainly in and around the gold-fields. He was a true transport pioneer, carrying mail and supplies thousands of miles into the most isolated of areas. Over time he built up a reputation as a herbalist and healer. In his later years he settled in South Australia … a well known and liked colourful and controversial figure … people flocked to receive his cures. He lived until he was 106 … no wonder he became known as the “Wonder Man”

Pasted at the front is a note on the author Madeleine Brunato who had spent time among the Mahommedan tribes of Quetta. The note is signed and annotated by the author.