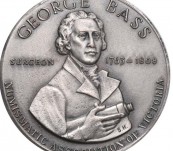 George Bass, Surgeon an Explorer carried out two voyages to confirm the Bass Strait and the separation of Tasmania (then Van Diemen’s Land) from mainland Australia – known affectionately in Tasmania as “The Other Island”.

In 1797 he set off in an open whaleboat with a crew of six. They sailed to Cape Howe at the farthest point of South-east Australia and, from there sailed west along the Gippsland coast to Western Point, at the entrance to Port Phillip. Observations of the rapid tide and long south-western swell supported his view that a large Strait lay in front of him.

In 1798 he set out again, with Matthew Flinders in the sloop Norfolk and circumnavigated Van Diemen’s Land. They visited the Derwent River which had previously been named by Captain John Hayes. On return to Sydney, Flinders promoted the naming of the Strait after Bass … the then Governor, John Hunter agreed.

Bass’s later life was adventurous and … likely …tragic, making the date of his death on the medal questionable.

The medal was struck in 1968. It was produced by K.G. Luke & Sons, Melbourne for the Numismatic Association of Victoria. 160 example were produced in bronze and a similar number in silver. This one is identified as number B4.

50mm in diameter with a high relief bust of Bass facing right, carrying his spyglass. On the reverse a delightful image of the whaleboat, the sloop Norfolk an the chart and route of the vessels, appropriately date.