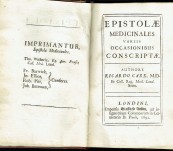 A first edition of this scarce 17th Century collection of medical instruction by Richard Carr MD published by Anson Stafford, London in 1691.

Richard Carr was born in Lincolnshire, educated at Louth Grammar School and then Magdalene College, Cambridge. He entered Cambridge, shortly after Newton, as a sizar in 1667, graduated BA in 1670 and MA in 1674. He then became Master of the Saffron Walden Grammar. In 1683 he went to Leyden to study Physic and then back to Cambridge for his MD in 1686. He was created a Fellow of the College of Physicians by James II Charter, admitted in 1687.

{Note a "sizar" was a special arrangement at Cambridge whereby food lodgings etc could be obtained for free by the sizar completing some lowly task such as serving food to others etc ... Newton was also a form of sizar called a subsizer]

This book is his main recognised work; it is dedicated to the College of Physicians.

The book contains eighteen “epistles” written in a readable popular style as if addressed to patients rather than physicians. They are in Latin. The first epistle deals with the use of sneezing powders, the second smoking tobacco and numerous others relate to dietetics including a strong suggestion that it is most healthy to get blind drunk once a month. The virtues of the Tonbridge and Bath waters are discussed as well as the remedial effects of a trip to Montpellier for phthisis. He reflects on the “struma” and notes that King Charles II touched over ninety two thousand people between 1660 and 1682 and respectfully doubts they all got well. His third epistle deals with the coffee-houses … not a modern phenomena … referring to coffee, thee, twist (a mixture of both), salvia and chocolate.