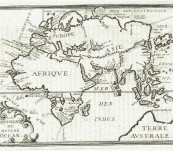 A scarce early copper engraved map of the eastern hemisphere with an outline of Northern Australia from the Dutch understanding.

Published in Paris in 1648. The cartographer was Philippe Briet (1601-1668) also know as Philippus Brietius. He was a Jesuit scholar, historian and cartographer.

Uncommon, with a good dark impression. Text on reverse with some show through as usual. Very good condition. Size 19cm by 14.5 cm in the printed area. Uncoloured as it should be.

As well as Terre Australe there are a number of other cartographic features of interest including, Korea shown as an island, Africa has a large Lake Zaire, Sri Lanka is named Zailan an early Arabic name for the island. The ranges across Asia, east to west and down into the Himalayan region are the only mountain features shown. Note the sea between Java / Timor and Australia is named “Lanchidol” a curiosity explored by Donaldson in his paper “In Search of a Sea: the Origins of the Name Mare Lanchidol” published by the Australian Association for Maritime History” well worth the read …