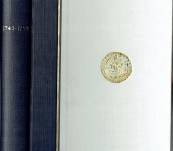 Sounds like a bibliography and, there is one of some very unusual unique items, but it is much more than that.

Editor Glyndwr Williams, History Queen Mary’s College London, is also on the Council of the Navy Records Society. He spent many years compiling this excellent book.

First edition published in 1967 by the navy Records Society, London. Octavo,303 pages plus details of the Society and Members. Bound in their traditional style. Still has the original thin glassine protector which are pretty limited but it is amazing that is has survived. Perfect condition excepting some light creasing of the odd page, a printing defect. Illustrated and with a facsimile fold out of the circumnavigation World Map.

The editors tackles some specific aspects of the important famous voyage. Part I The Origins of the Voyage; Part II – Preparations and Preliminaries; Part II – the Voyage England to Juan Fernandez; Part IV The Voyage Juan Fernandez to Macao; Part V – the Voyage the Acapulco Galleon; Part Vi – the Homecoming … List of Documents etc.

Importantly, it contains the text of the manuscript journal of Lawrence Millechamp for the first time. Through this and numerous other documents the editor proves that the official account of the voyage … the magnificent volumes under the name of Richard Walter, Chaplain, had in fact been largely written by Benjamin Robins, a ghost writer for Anson himself. And, that the official account are smooth over certain issues in particular relating to the Spanish Galleon … significant Prize Monies were at stake and the story had to fit .. so to speak.

Anson’s Voyage – Expands the Knowledge and the Intrigue