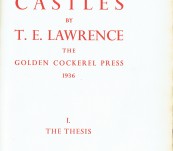 A first edition set, printed by the Publisher Christopher Sandford, Francis Newberry and Owen Rutter at the Golden Cockerel Press, 10 Staple Inn, London. Completed on the 2th May 1936.

Limited to 1,000 sets this one numbered 627, Printed in Perpetua type on British Mould-made paper. Bound handsomely, in half red leather over beige cloth covered boards, with gilt tiles to spine, bands etc by the distinguished Sangorski and Sutcliffe with their discrete stamp, lower paste down. A little rubbing to the leather at a corner, some age to the beige cloth, and a slight hint of tone to the paper. Regardless, a very good set of a very desirable work.

Volume I - The Thesis – 55 pages plus 64 pages containing 96 plates not included in the text pagination. Full page map in the text and two folding facsimile maps loose. The three-page introduction by younger brother Arnold Walter Lawrence does a good job.

The Thesis was submitted by Lawrence as part of his final year as an undergraduate at Jesus College, Oxford. Its length was not to exceed 12,000 words. His research required much travel through parts of England and Wales, France, Syria and Northern Palestine. In England he used a bicycle by Morris of Oxford (later motor car fame). During 1906 to 1908 he went to France and rode further than Le Tour to get his photographs and drawings of Crusader influenced Castles. In 1909 he went East and from Beyrout went to the Sea of Galilee north to Aleppo, then by carriage to Edessa and Damascus etc. His thesis was a first-class success (literally)0 and the only reason Oxford did not publish it then was the prohibitive cost of the many necessary illustrations.

We could go on, this is obviously a special work ... from his very opening “Apology for Dullness” we can see the disciplined character, the stamina and fortitude that had already developed in this young man.

Volume II – the Letters (all but one to his Mother) – 60 pages plus 32 pages containing full pages plates. Some other illustrations in the text as they appeared in the “letters”.

With a two-page Preface by his Mother who reflects on his qualities … he had walked 1,100 miles in the Middle East! Some of his letters were unfortunately lost in a wreck on the Yang Tze River in 1923 and never recovered.

A proud Mother she writes … “being always very strong physically he was full of enthusiasm for every subject in which he was interested. He had a most loving and unselfish nature and no boy or man ever did more thoroughly whatever his hand found to do.”