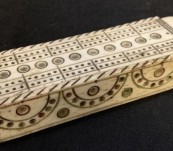 A classic French Prisoner of War cribbage board hand carved from cows’ bone. Some original colouring in typical style.

The game of cribbage played in England from the 16thC was very popular at the time of the Napoleonic Wars. French prisoners took to carving the familiar boards and no doubt received payment for their trades. This example has lost its pegs as usual (modern players take to matchsticks) and has a wood lower board. A little beauty.

The game of cribbage if not known by the reader should be learnt by all … collect 61 points and “peg out" is the game for this board. Two channels as usual for the standard game of two, with variations for three and four. Get the 15’s, pairs and flushes lined up … and don't forget “One for His Nob"!

Cribbage a game for the thinking and hard working – once played in every pub in England … try it yourself ... with a 200-year-old board to impress.