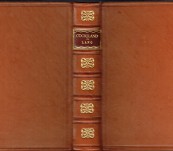 A first edition of Lang’s lengthy book on territory that was essentially shortly to become Queensland. Cooksland was his offered naming and recommending a southern boundary down south of the Clarence River, in modern day NSW.

John Dunmore Lang (1799-1878) hold a important place in the history of and recording of the settlement period. He was instrumental in promoting immigration from both Britain and Germany. Regarded as Australia’s first Republican.

Published by Longman Landon. Octavo, 496 pages with folding map of the proposed “Cooksland”’ as frontispiece, six illustrations of views which are tinted and a portrait of Dr Leichardt. Rebound in full calf by Roger Perry to a super standard. Separate red leather title with gilt work to compartments on spine. Internally some quiet heavy foxing in patches … other area quite clean. Scarce.

The contents are varied and the dry patches of typical Lang on the “artificial productions” of Cooksland can be a bit dreary. However interspersed this some important and lengthy narrative. Such as Leichhardt’s travels from Moreton Bay to Port Essington. Leichhard’s letter from around the Glass House Mountains; Andrew Petrie’s travels to Wide Bay; Schmidt’s travels to the Bunya-bunya tree country. Also, he allocated 130 pages to the aborigines, and whilst he writes with a degree of Lang arrogance there is some useful information there.

Cooksland a unique Dunmore Lang work - some foxing but complete and nicely bound in full leather.