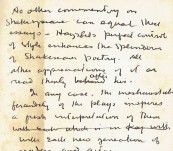 Published by the Oxford University Press a re-set re-issue of 1955. Small octavo, 276 pages after preliminaries. With an introduction by Sir Arthur Quiller-Couch.

William Hazlitt (1778-1830) knew his Shakespeare and first published “Characters” in 1817. Ever since it has been considered a “go to” reference on the Bards work.

This little book bought from an auction of some of Lindsay’s extensive library has a delightful “opinion” penned in his hand, with corrections, on the front end paper.

“No other commentary on Shakespeare can equal these essays – Hazlit(t)’s perfect control of style enhances the splendour of Shakespearean poetry. All other appreciations of it read thinly after his.

In any case, the inexhaustible fecundity of the plays inspires a fresh interpretation of them with each generation of readers and actors.”

Shakespeare’s Characters and some wise words penned in the hand of the great Norman Lindsay.