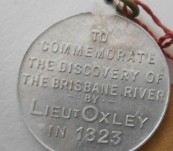 John Oxley (1784-1828)officially discovered the Brisbane River naming it after the then Governor of New South Wales in 1823. He had some assistance from three shipwrecked sailors, Parson, Finnegan and Pamphlett who had been taken in by a local aboriginal group. Oxley was looking for new locations for convict sites and recommended Moreton Bay on his return. In 1824 he returned and discovered the Bremer River a major tributary.

The medal 3cm in diameter of light white metal shows the Brisbane Shield with its connection to the land and sea … Brisbane Centenary 1823 and 1923. On the obverse boldly “To Commemorate the Discovery of the Brisbane River by Lieut Oxley in 1823”.

Accompanied by a card tag with a typical profile image of Oxley related to celebrations carried out the following year. Amazing that this has survived.

The Discovery of Brisbane Celebrated nearly another hundred up!