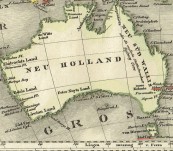 A unsophisticated but scarce early 19thC map of Australia, Asia, and the Pacific east to the Sandwich Islands [Hawaii].

26cm by 20cm in the printed area. Good condition. Engraved by D Huber of whom little is known ... often confused with the earlier engraver of that name. The cartographer is a mystery to be completely solved. Huber worked with Carl Stein, but we would say this map is too early for Stein. It is similar in style by Franz Biller although again this is earlier in cartographic detail, so could be a work from which Biller’s map is a derivative. None of Stein, Huber or Biller appear in the Australian Map Authority by Tooley nor in his definitive list of Map Makers. Likely Austrian c 1825.

Likely original partial colouring or at least sympathetic. Australia (here Neu Holland) complete but coastline out of “true” in many instances. Tasmania shown as van Diemens Ins and the North and South Islands of New Zealand carry their Maori names. The cartography of New Guinea is starkly incorrect not to be properly charted for some time to come.