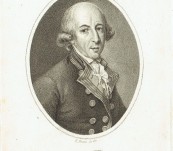 A well-executed copper engraving using the mezzotint technique, of First Governor Arthur Phillip from the original German publication of his First Fleet Journal.

Arthur Phillip (1738-1814) was appointed Governor designate of the new Colony to be formed in New South wales. His First Fleet arrived in January 1788 and he selected Port Jackson as the first settlement having decided Botany Bay was unsuitable. He returned to England in 1792 an was succeeded by John Hunter.

Dimensions 20cm by 12cm with a strong plate impression an clear bold printing. Framed would make a nice library item for a First Fleet follower.