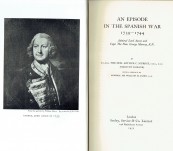 Captain Murray was in charge of the supply ship Pearl during the Anson voyage of the 1740’s. The voyage ended in success with the plundering of the Spanish galleon, the plundering of Spanish settlements in South America and the taking of much gold etc. Unfortunately, most of the fleet was lost and many men died from scurvy and other ailments. Murray was later remembered as having contributed to the difficulties having lost touch with the remains of the fleet after the Straits of Magellan and seemingly wandered for some time around the south east Pacific. Essential supplies were therefore delayed in getting to the rendezvous point at Juan Fernandez Island. Here we have the fanatical Elibank researching charts and records at the Admiralty to prove that his forefather was no maritime slouch … we think he did!

A most interesting presentation copy. The author a descendent of George Murray has personalised his work with various additions: the picture from the dust-wrapper pasted onto the front end paste-down; personalised manuscript and typescript notes and a review of his book on the front free endpaper. Inscription from the author on half-title: “Shortly after the publication of this book in the autumn of 1952, the Admiralty adopted it as a standard work on the subject of Lord Anson's famous voyage, and ordered 136 copies of it from the Publishers for distribution to the ships of the Royal Navy. Arthur C Murray (E) 15/9/55”. Under the illustrated portrait of Captain George Murray … in Elibank’s hand “Later, 6th Lord Elibank”. And, pasted at the rear an eight page document printed by Clarke of Edinburgh … “Queen Elizabeth of England (1533-1603) Some aspects of her story in so far as they relate to the Spanish Armanda; the execution of Mary Queen of Scots etc” By Elbank and signed as Arthur Murray of Elibank.

Elibank was affectionately known simply as "E" .... nice one