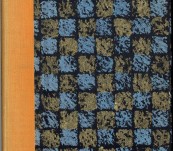 A fine first of type edition published in 1931, having been published as part of a collection the previous year. A beautifully written and presented short story by the gifted Rhys Davies.

Printed by Capell at the Bronze Snail Press London. Octavo, 39 pages, number 131 of a limited edition of 165 copies (plus an additional 17 for presentation). Printed on English hand-made paper and hand numbered and signed nicely by the author. Quarter gold toned buckram over an almost iridescent metallic designed paper covered boards.

Rhys Davies (1901-1978) was born in Wales and became o prolific writer ... this is one of almost 100 short stories and the best presented. Whilst he lived most of his adult life in London his work is often set in Wales ... as is “A Woman”. He was friendly with D.H and Frieda Lawrence and stayed with them in France shortly before this work was penned and D.H. Lawrence’s passing. Davies smuggled Lawrence’s “Pansies” into Britain and saw to its publication.

“A Woman” a forthright story about the development of a young woman in South Wales into “A Woman” .. with all the challenges of the time and place. Beautifully written.

A book with a short poignant story … would make a super gift.