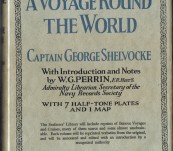 Published by the Seafarers’ Library, that is Cassell and Co, London a first of its type 1928. Thick octavo, 262 pages after the xxii Introduction, which adds well to the principal narrative. Foxed along the edges, title and occasionally as is often the case with the thick spongey paper used by the publisher. Still a pretty good copy and rare in a very good dust jacket which has protected the boards well. Illustrated with 7 half tone plates and a map.

George Shelvocke (1675-1742) joined the Royal Navy at 15 and rose to second lieutenant during two long wars with the French. When the war ended he received no pension which drove him to take up privateering. In 1719 he was given charge of the Speedwell to accompany John Clipperton in the Success to take Spanish vessels in the Pacific. Shortly after leaving England Shelvocke deliberately parted ways with Clipperton to control his own fortunes. In the Pacific they were wrecked at Juan Fernandez. They managed to build a sizeable vessel out of recovered timbers and fresh hewn trees. They carried on and took their first Spanish vessel, occupied it and renamed it the Happy Return. They proceeded to take several prizes accumulating treasure along the way. They sailed north to California and made various remarks on the territory including the prospects of finding gold. From there they sailed the Pacific to Canton and from there back to England. Shelvocke was accused of hiding some of the treasure to his advantage … but got away with it … and wrote this account. A worthy read it was taken on Pacific voyages by all those that were to come after him.

On rounding the Horn his second shot a black albatross. Later, Wordsworth read the account and suggested to Samuel Taylor Coleridge that the shooting could be a useful device for his epic poem that was to be The Rime of the Ancient Mariner.

Shelvocke after and in the mode of Dampier – before Anson and the great Navigators.