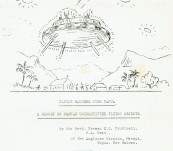 Typewritten document with sketches of flying saucers, tables of information etc. Foolscap,45 pages stapled in corner. This is a contemporary copied document. We cannot locate the original or any other copies and consequently this may well be a unique item, a classic UFO record.

In June 1959 Rev William Gill witnessed the most extraordinary contact with a UFO at Boainai Mission on the north-east coast of Papua. Previously he had reports of UFO sightings by Stephen Moi a mission teacher – he was sceptical. On the 26th June in the early evening standing in front of his house he saw a brilliant light which descended towards him. He was joined by witnesses. The object came to within three hundred feet and remained stationary . It was circular with a wide base and narrow upper structure and two sets of protruding legs. Periodically a shaft of blue light emanated from the centre. A human-like figure appeared, joined by three others. Father Gill described them in his notes as “men”. They watched the UFO for several minutes before if disappeared in the clouds. An hour later another smaller craft was seen over the sea and then another over Wadobuna Village. Twenty minutes later the larger craft reappeared and stayed for half an hour, the smaller craft coming and going. The next day discussion were held and observations continued that evening. The larger craft returned and the human like figure appeared. Gill waved and figure waved back. They beckoned it to land and it hovered close to the ground before disappearing at speed.

Gill sent his notes to Cruttwell who sent a report to the London, Flying Saucer Review. As a result Crutwell was appointed local investigator for the International. U.F.O. Observer Corps.

Crutwell commenced research into Papuan sightings the first modern day sighting being in 1958 … an event covered up by the Australian Military. This typed report is a summary of his extensive findings. The chapter headings give you some idea of the depth … Sightings before 1958; 1958 The Overture; 1959 “Tilley Lamps in the Sky”; Kaleidoscopic Light; The Visitation at Boainai; Corroboration from Giwa and Baniara; Strange Craft over Menapi; More Spherical Objects and Others; The Last Sightings of the Year; Have We any Clues? The Appendices are remarkable … Their Concentration in Area; Their Distribution in Time; The Close Knit Nature of the Sightings … And tables and graphs … Summary of Papuan Sightings; Graph of Monthly Frequency; Daily Frequency; Times of Sightings; Table of Localities; Table of UFO Types; Names of Principal Witnesses.

Unique comprehensive work on the Papuan UFO Sightings of 1958

ON HOLD FOR VALUED CUSTOMER