A Treatise on Land-Surveying – Thomas Dix of Oundle – 1799 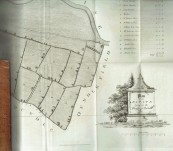 Printed by Baldwin, New Bridge Street, London and sold by Seeley at Ave-Maria-lane and Seeley Buckingham and the Author at Oundle.

Octavo, 182 pages illustrated with 180 diagrams and nine of ten copper plates, five of which are large and folding. There are ten plates noted in the last but the last was a separately stitched facsimile field book which is invariably missing.

The author Thomas Dix was a teacher at the Northampton School of Oundle. Dix dedicates the work the Worshipful Company of Grocers and so he should. The school was formed in 1556 when Sir William Laxton, Lord Mayor of London and Master of the Worshipful Company of Grocers endowed a “Free Grammar School”. Under the terms of his will, the Grocers have been supporting the school ever since. Of the 108 livery companies in London they are number two … established in 1515 and originally known as the Guild of Pepperers who go back to 1100.

The advertisements to the book suggest this is a second edition … more complete. The author does not pretend to any new Discovery; his aim is the deficiency of a Book … to instruct Boys in the first rudiments of Land-surveying by the Chain and Cross only.

Bound in full leather, gold lines to spine but no sign of ever having a title label. Gilt knurling to board edges, joints split but holding quite well. Internally very clean and the fold out engravings are in pretty good condition. Everything a young chap need to survey the family estate.

The book went through a number of later editions well into the 1820’s. This is the earliest copy we have found.